Where can I find the best businesses in Hamilton? Right here in this business directory

The inhamilton business directory prides itself on hosting the best businesses in Hamilton.  We ask all business at the point of registration to commit to a high level of customer service and excellence. Enter Directory

We Specialize in Dynamic websites, Videos & business directory. Our web designs are filled with sliders, para las and dynamic animations that makes your website come alive and tell your business story.

If you are a Business manager looking for a website or video we offer both at an affordable price to site visitors and directory members as an appreciate for using and joining our directory.

“Hamilton is a Canadian port city on the western tip of Lake Ontario. “

Hamilton offers exciting arts and culture for visitors and locals.

Monthly art crawls along James Street North bring thousands of art-lovers downtown on the second Friday of every month to enjoy the arts district’s studios, galleries, restaurants and stores, all open late for this well-known event.

The beautiful Art Gallery of Hamilton and one of the country’s leading university art collections, McMaster Museum of Art, are also in Hamilton. There are artistic areas in neighbourhoods across the city, with more and more artists and creative professionals moving to Hamilton.

As one of the oldest cities in the province, Hamilton has a fascinating historical heritage.

The city is full of beautiful architecture, incredible museums and many landmarks. Its 15 National Historic Sites include Dundurn Castle, HMCS Haida, Hamilton Museum of Steam & Technology and the newly enhanced Rock Garden at Royal Botanical Gardens.

Canadian Warplane Heritage Museum, the country’s largest flying air museum, is also in Hamilton and features one of only two air-worthy Lancaster bombers left in the world.

Hamilton is located between the southern shores of Lake Ontario and the lush landscape of the Niagara Escarpment.

The city offers easy access to conservation and recreation lands, a natural playground for cyclists, hikers, boaters and other outdoor adventurers.

More than 100 beautiful waterfalls are located near the escarpment’s wooded trails, just minutes from the city’s downtown core. Visitors can also enjoy waterfronts at the West Harbour and the Beachfront. Outdoor family attractions include Royal Botanical Gardens, African Lion Safari and Wild Waterworks.

In pre-colonial times, the Neutral First Nation used much of the land but were gradually driven out by the Five (later Six) Nations (Iroquois) who were allied with the British against the Huron and their French allies. A member of the Iroquois Confederacy provided the route and name for Mohawk Road, which originally included King Street in the lower city. 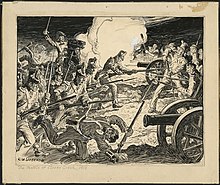 Following the United States gaining independence after their American Revolutionary War, in 1784, about 10,000 United Empire Loyalists settled in Upper Canada (what is now southern Ontario), chiefly in Niagara, around the Bay of Quinte, and along the St. Lawrence River between Lake Ontario and Montreal. The Crown granted them land in these areas to develop Upper Canada and to compensate them for losses in the United States. With former First Nations lands available for purchase, these new settlers were soon followed by many more Americans, attracted by the availability of inexpensive, arable land. At the same time, large numbers of Iroquois who had allied with Britain arrived from the United States and were settled on reserves west of Lake Ontario as compensation for lands they lost in what was now the United States. During the War of 1812, British regulars and Canadian militia defeated invading American troops at the Battle of Stoney Creek, fought in what is now a park in eastern Hamilton.

The town of Hamilton was conceived by George Hamilton (a son of a Queenston entrepreneur and founder, Robert Hamilton), when he purchased farm holdings of James Durand, the local Member of the Legislative Assembly of Upper Canada, shortly after the War of 1812. Nathaniel Hughson, a property owner to the north, cooperated with George Hamilton to prepare a proposal for a courthouse and jail on Hamilton’s property. Hamilton offered the land to the crown for the future site. Durand was empowered by Hughson and Hamilton to sell property holdings which later became the site of the town. As he had been instructed, Durand circulated the offers at York during a session of the Legislative Assembly, which established a new Gore District, of which the Hamilton townsite was a member.

Initially, this town was not the most important centre of the Gore District. An early indication of Hamilton’s sudden prosperity occurred in 1816, when it was chosen over Ancaster, Ontario to be the new Gore District’s administrative centre. Another dramatic economic turnabout for Hamilton occurred in 1832 when a canal was finally cut through the outer sand bar that enabled Hamilton to become a major port. A permanent jail was not constructed until 1832, when a cut-stone design was completed on Prince’s Square, one of the two squares created in 1816. Subsequently, the first police board and the town limits were defined by statute on February 13, 1833. Official city status was achieved on June 9, 1846, by an act of Parliament of the Province of Canada.

By 1845, the population was 6,475. In 1846, there were useful roads to many communities as well as stagecoaches and steamboats to Toronto, Queenston, and Niagara. Eleven cargo schooners were owned in Hamilton. Eleven churches were in operation. A reading room provided access to newspapers from other cities and from England and the U.S. In addition to stores of all types, four banks, tradesmen of various types, and sixty-five taverns, industry in the community included three breweries, ten importers of dry goods and groceries, five importers of hardware, two tanneries, three coachmakers, and a marble and a stone works.

As the city grew, several prominent buildings were constructed in the late 19th century, including the Grand Lodge of Canada in 1855, West Flamboro Methodist Church in 1879 (later purchased by Dufferin Masonic Lodge in 1893), a public library in 1890, and the Right House department store in 1893. The first commercial telephone service in Canada, the first telephone exchange in the British Empire, and the second telephone exchange in all of North America were each established in the city between 1877–78. The city had several interurban electric street railways and two inclines, all powered by the Cataract Power Co.

International Harvester Company buildings by the waterfront, taken in 1907. The rise of industry in the city led to economic and population growth until the 1960s.

Though suffering through the Hamilton Street Railway strike of 1906, with industrial businesses expanding, Hamilton’s population doubled between 1900 and 1914. Two steel manufacturing companies, Stelco and Dofasco, were formed in 1910 and 1912, respectively. Procter & Gamble and the Beech-Nut Packing Company opened manufacturing plants in 1914 and 1922, respectively, their first outside the US. Population and economic growth continued until the 1960s. In 1929 the city’s first high-rise building, the Pigott Building, was constructed; in 1930 McMaster University moved from Toronto to Hamilton, in 1934 the second Canadian Tire store in Canada opened here; in 1940 the airport was completed; and in 1948, the Studebaker assembly line was constructed. Infrastructure and retail development continued, with the Burlington Bay James N. Allan Skyway opening in 1958, and the first Tim Hortons store in 1964.

Since then, many of the large industries have moved or shut down operations in restructuring that also affected the United States. The economy has shifted more toward the service sector, such as transportation, education, and health services.

In 1997 there was a devastating fire at the Plastimet plastics plant. Approximately 300 firefighters battled the blaze, and many sustained severe chemical burns and inhaled volatile organic compounds when at least 400 tonnes of PVC plastic were consumed in the fire.

“We invite all businesses committed to a high level of customer service to join and add their business listing in the appropriate directory.”

“We offer sponsorship opportunity for businesses wishing to pay a small fee to promote their business on prominent spot on our directory.”